The four Ninja Turtles find the Foot Clan causing trouble in New York City once again. After the streets are cleared, the turtles are told by April via T-Glass that Bebop is robbing a bank and is well-armed with the chainsaw, explosive bombs, and guns. Working together, the turtles defeat Bebop, before learning that his partner Rocksteady is also causing trouble, threatening to destroy the subway system with time bombs. Upon defeating the hammer-swinging Rocksteady, the four turtle brothers are again contacted by April, who reveals that Slash is hiding deep in the sewers, so the turtles investigate while watching out for Slash, who is constantly taunting them. The turtles are directed to a construction site high up in the skyscrapers, where Karai has placed explosives, whom they defuse before fighting Karai, who then escapes via jet-pack.

The turtles next face off against Armaggon, before also encountering Wingnut, whom they soon defeat. Afterward, General Krang, not impressed by the turtles defeating his minions, attacks New York himself, but is also ultimately defeated, though the turtles celebrate too early, as Krang then upgrades himself and becomes “Mega Krang.” The turtles once again triumph over Krang, before being attacked by Shredder himself, who is annoyed with everyone else’s failure to destroy them and attempts to do it himself. Shredder proves to be their biggest challenge yet, but through teamwork and their experience, the turtles prevail, saving New York from the Foot Clan, at least for the moment. 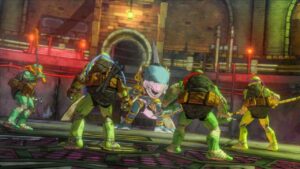 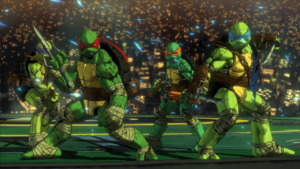