A short sweet game that gets straight to the action. Play through 11 challenging levels where 1 shot can be the difference between a level transition or spamming the R key. Expect 1-2 hours of playtime This game features fast paced combat centered around juggling different enemy types, dodging projectiles/enemy attack patterns, and your ability to get armed

Play as “Doomer” a grim reaper stuck in a dead end job who only seeks to relax on his day off with the new limited edition P.E.S he just bought from the store, until the up seller’s attack and steal his new console. Now is tasked of running through this wacky world to obtain his console back so that he can chill properly on his day off 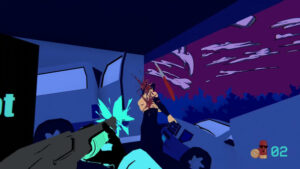